“Throughout school I was subjected to constant bullying and name-calling. This started me on the road to doubting myself and feeling uncomfortable around people”

Paul has suffered from an invisible disability since birth, haemophilia. This results in him bleeding longer after an injury and easy bruising; as well as an increased risk of bleeding inside his joints or the brain. 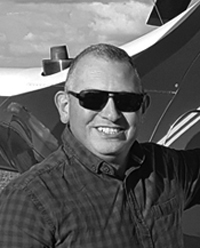 Things got no better when he started work as his employers struggled to understand his invisible disability.

“In my last job I fell, and this finished my working life; it was a big blow for me.”

Since Paul was awarded a scholarship and joined the FSDP family in 2014 he has become a changed man. He has gone on to become a FSDP mentor, helping candidates through the selection process at RAF Cranwell and subsequently visiting new scholars during their flying training. This year he has also gained his pilot’s licence.

“After being awarded the scholarship, I started to believe in myself; I was not only doing things that non-disabled people were doing but I was doing things despite my disability. I now try anything I want to including all those things I thought I would never be able to – thanks to FSDP. My next challenges are to join the Air Cadets as an instructor and to learn to fly a helicopter!”